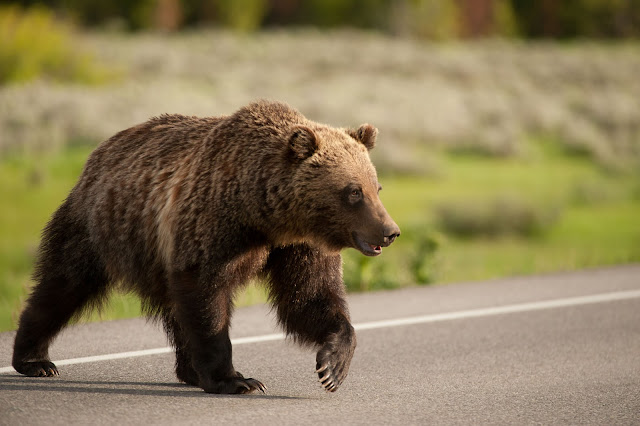 One of 610's sons who was put down by
U.S. Fish and Wildlife Services this Summer.
Two weeks ago another grizzly was killed in Jackson Hole after becoming potentially dangerous from getting hooked on food left out by people. And this was no ordinary bear, but the son of celebrity grizzly 610, who in turn was the daughter of the most famous grizzly of all: 399. The brother of this bear was also killed by managers in June because he too ate garbage on private lands and became emboldened around people.
Selfish and careless actions have robbed us of these beloved bears. More tragically, these are hardly isolated incidents.
So far this year at least 24 grizzlies have been killed by managers in Greater Yellowstone due to conflicts with humans, mostly over garbage and conflicts with livestock. Most of these deaths are avoidable, and they undermine the hard-fought progress made toward recovering our threatened grizzlies.
Of all the tools available, keeping garbage and attractants away from bears is the best way to prevent conflicts. Since 1975, when grizzlies were protected under the Endangered Species Act, strong food storage rules and public education have contributed enormously to reversing the population’s decline. Indeed, Yellowstone park, once the deadliest place for bears in the ecosystem, now sees very few garbage-related conflicts because of the agency’s commitment and aggressive enforcement of sanitation rules.
So what is the problem in Jackson Hole?
It is not because people do not know the importance of keeping human foods away from bears. Signs that warn “A Fed Bear is a Dead Bear” are at every trailhead and campsite in the region. But education by itself is not enough. Strong rules must also be instituted, matched by equally strong enforcement.
In this the U.S. Fish and Wildlife Service has been abdicating its legal duties to protect the grizzly. The Endangered Species Act not only prohibits people from killing grizzlies, except in self-defense, it also bans harassing and feeding grizzlies. That is why Yellowstone and Grand Teton national parks and the U.S. Forest Service adopted rules to keep attractants away from bears.
Elsewhere, Fish and Wildlife has exercised its authority to stop private landowners who continue to feed grizzlies after being warned. So why does the agency continue to look the other way as a self-indulgent Jackson landowner deliberately feeds grizzlies, including 399, 610, and her two subadult offspring — now dead from their garbage habit?
Fear of the private property rights bogeymen is a likely explanation. In the rural American West any limits on owners of private property tend to be seen as an anathema — even measures that have enormous public benefit, such as keeping garbage away from bears.
But if ever government agencies needed a reason to place the broader public good over private property rights, keeping these bears alive — for their sake and ours — is one of the best.
Teton County also needs to do more to address the problem. The laws on the books regulating feeding wild animals are weak, and enforcement of existing laws is weaker yet.
It amazes me that a county a wealthy as Teton County has no wildlife department with staff authorized to address conflicts and enforce the rules. Other similarly well-to-do counties, such as Aspen’s Pitkin County in Colorado, have a wildlife officer and a program to deal with bear conflicts. In Lake Tahoe a consortium of state, federal and local governments has created Keep Tahoe Bears Wild to implement feeding bans and proper disposal of waste. The community of Durango, Colorado, has adopted strict sanitation rules, including a requirement for waste haulers to offer certified residential bear-resistant trash containers. And all of these efforts involve black bears, not endangered grizzlies.
Don’t the celebrity grizzly bears of Jackson Hole deserve the same care? 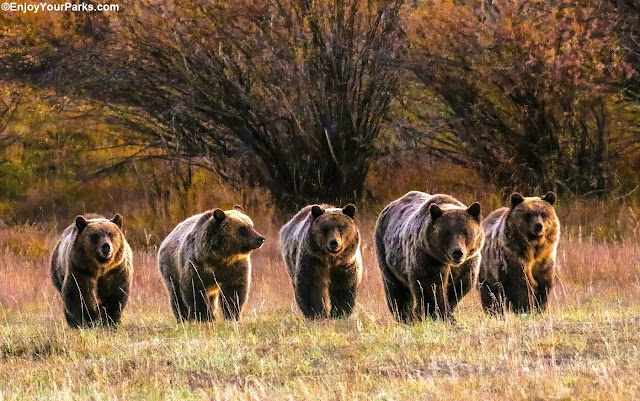 This is the famous 399 and her quads who were born in
winter of 2020. They will be on their own next
Spring. Hopefully this awful situation can be amended
before then.
(This beautiful photo was taken by David Biegal)

The co-founder of Grizzly Times, Louisa Willcox has worked to protect grizzlies and their wildland ecosystems in the Northern Rockies for over 40 years. Working with conservation groups, including Greater Yellowstone Coalition, Sierra Club and Natural Resources Defense Council, Louisa has been part of numerous successful community efforts to coexist with grizzlies.
Posted by Why Not? Because I Said So! at 9:51 PM