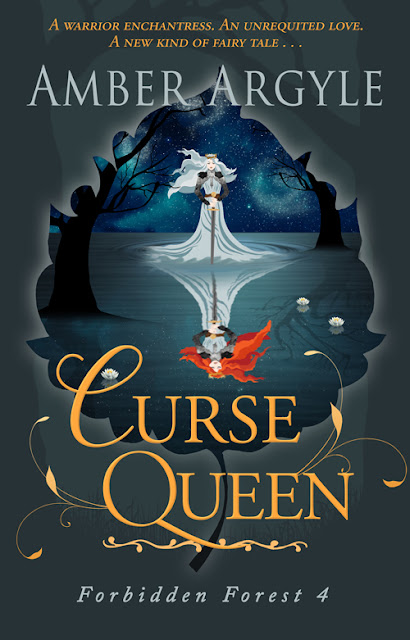 A warrior enchantress. An unrequited love. A new kind of fairytale . . .

You think you know the truth behind the curse's origins? You know nothing.
The path of a warrior enchantress is bathed in blood and magic.

Born to one of the most powerful families in the kingdom, Eiryss lives a life of luxury and magic. Until her father commits the ultimate act of treason.

Treason that sparks a war.

The life Eiryss knew is over. Her one-time friends are gone. All but Ramass. And if he would just look at her - touch her - the way she longs for, she might be able to bear it. But his heart belongs to another. There is only one path for Eiryss now: become a warrior enchantress and fight for what's rightfully hers. And if the powers that be deny her, well . . .

If they won't give Eiryss magic, she'll steal it.

CURSE QUEEN is a new fairy tale with hints of Snow White and Mulan. Though it fits best as the final book in the Forbidden Forest Series, it can be read as a stand alone. If you love stories filled with romance, dark magic, and wicked curses, pre-order your copy today!

Other Books in the series:

Lady of Shadows
by Amber Argyle
A lady. A soldier. And the beast that hunts them.

Can you hear him? The beast is coming for you...

Lady Caelia has shut herself in her manor house for months, hiding from her town’s stinging gossip and her father’s bitter disappointment. She's convinced her life couldn't possibly be any worse.

And then her only remaining friend is taken by the beast.

On the night of the girl's funeral, Caelia stumbles upon something wicked. Something that leaves her only one possible escape.

The Forbidden Forest and the beast within.

But Caelia's not the only one on the run from the shadows of the past. Gendrin failed to protect someone once. He won't fail again. If the two can learn to trust each other, they stand a chance of defeating the beast that hunts them.

Stolen Enchantress
by Amber Argyle
A beast. An enchantress. An unbreakable curse . . .
When her little sister is taken by the beast of the Forbidden Forest, Larkin does the unthinkable: she goes in after her.

Deep within the sentient woods, Larkin uncovers a secret that puts her in dreadful danger. Worse, now that the beast has had his taste, he’ll never stop hunting her. But the forest has woken something inside Larkin; something that gives her the power to fight back.

Using forbidden magic will get Larkin hanged. Not using it will leave her at the mercy of the beast's enchantment. But there’s a third option; one that scares her more than anything.

She could fall in love with the beast.

Fans of A CURSE SO DARK AND LONELY and A COURT OF THORNS AND ROSES will be spellbound by the fairytale retelling of Beauty and the Beast and The Pied Piper in Stolen Enchantress. One-click now to find out why readers around the world are getting lost in the Forbidden Forest!

Piper Prince
by Amber Argyle
An enchantress. Her prince. A dark curse . . .

Prince Denan lured Larkin into the Forbidden Forest with his magic panpipes and forced her to marry him. Together, they uncovered centuries of secrets surrounding the curse that spawned the wraiths. And Larkin began to fall in love with the man who had taken everything from her.

But the closer Larkin comes to the truth, the harder the wraiths hunt her.

If Larkin is to survive, she’ll have to unravel the curses's darkest secrets. Worse, those secrets are buried in the crypts of the Black Druids, men who consider Larkin a traitor they’ll kill on sight. But Larkin isn't the only one the wraiths are after.

Her piper prince's life hangs in the balance.

Beauty & the Beast and The Pied Piper collide in this romantic fairy tale retelling. Fans of A COURT OF THORNS AND ROSES and A CURSE SO DARK AND LONELY will love the unique magic and daring adventure in Piper Prince . Read your copy today!

Wraith King
by Amber Argyle
An enchantress. Her king. A dying magic . . .

An assassin has set his sights on killing Larkin and ending her new reign as queen. Worse, the magic is dying. The magic that protects mankind from the wraith. The same magic Larkin has used to keep the curse from destroying the man she loves.

Because once that curse reaches Denan's eyes, he will be worse than dead.

But there is one hope left. There is a darkness growing inside Larkin. And with that darkness comes power. Perhaps even enough power to defeat the wraith.

But in embracing that darkness, Larkin risks becoming the very thing that hunts her.

You don't want to miss the exciting conclusion to the Forbidden Forest Series. Read the daring Beauty and the Beast and The Pied Piper fairytale retelling that has captured hearts the world over. Read Wraith King and let the magic, adventure, and romance sweep you away!
Posted by Why Not? Because I Said So! at 10:19 PM