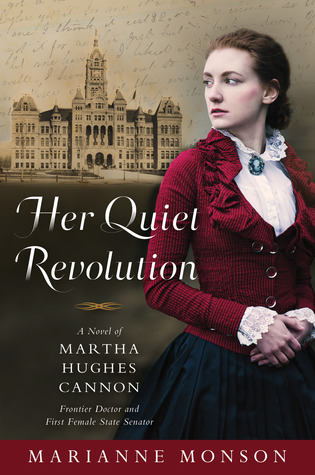 
Book Summary
A novel based on the life of Martha Hughes Cannon, a pioneer woman who overcame tremendous odds.

When her baby sister and her father die on the pioneer trail to Salt Lake City, Mattie is determined to become a healer. But her chosen road isn't an easy one as she faces roadblocks common to Victorian women. Fighting gender bias, geographic location, and mountains of self-doubt, Mattie pushed herself to become more than the world would have her be, only to have everything she's accomplished called into question when she meets the love of her life: Angus Cannon, a prominent Mormon leader and polygamist.

From the American Frontier to European coasts, Martha's path takes her on a life journey that is almost stranger than fiction as she learns to navigate a world run by men. But heartache isn't far behind, and she learns that knowing who you are and being willing to stand up for what you believe in is what truly defines a person.

Her Quiet Revolution is the story of one woman's determination to change her world, and the path she forged for others to follow.

Her Quiet Revolution ended up being a great surprise to me. I love history and reading historical fiction. This book happens to be a Biographical Historical Fiction. It's based on the life of Martha Hughes Cannon (1857-1932) a Pioneer woman,  one of the first female doctors to go to medical school, and the first female state senator. Her credentials are quite impressive but she went through a lot to get to that long list of accomplishments.

This book spans four decades starting when she came across the plains of America in a covered wagon with her family. During this trip, her baby sister dies and her father dies three days after they enter the Salt Lake Valley. These tragic deaths motivate her to study to become a healer and eventually a well-respected doctor. During this period, and in Utah, it is amazing that she was able to reach her goals. I admire Mattie so much and how she didn't give in and always was looking for ways to achieve her dreams. She definitely was not like most women in her time period. Mattie wanted more than to just have a husband and children. The one aspect of her life that shocked me a bit is when she fell in love with Angus Cannon, a prominent Mormon leader, and polygamist. Though she married him and had children with him, she never had him fully in her nor her children's life. Polygamy was not a popular thing in the late 1800s  in the USA and Mattie had to flee a few times to protect her and her children from local & federal authorities.

This book showcases so many ideas and the beginnings of women building a place for themselves in the USA and the world. Mattie was there at the beginnings of great medical understandings and practices. Mattie helped open doors for women being accepted into medical school and into the profession. She also stood as a voice for women to be heard and represented in the political arena. Her life was so amazing and I so enjoyed reading about her and her family. I especially loved her step-father, James, who basically raised her from a young child. He loved and supported Mattie and cushioned the hard stance that Mattie's mother Elizabeth took towards Mattie's early life choices. In later years, her mother changed her views and was a great support to Mattie and her children.

This was an incredible read that made me grateful for women like Mattie. They paved the way for the women of today. I highly recommend this book to all readers who love historical fiction.

Marianne Monson holds a BA in English Literature, an MA in English Pedagogy, and an MFA in Creative Writing. The author of two historical novels, she has a strong interest in the relationship between literature and history. Marianne has taught English and Creative Writing and regularly speaks at writing conferences and is the author of ten books for children and adults. She has two children and writes from a 100-year-old house in the town of Astoria, Oregon.

Learn more about Marianne and her books HERE:  http://www.mariannemonson.com


Watch the Fox 13 News Interview
about "Her Quiet Revolution"
Posted by Why Not? Because I Said So! at 8:00 AM