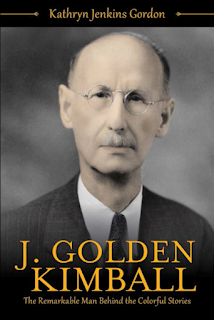 {Book Description}
He is J. Golden Kimball, and when he is gone, there will never be another. He was the original product, and when Providence had finished him, the pattern was lost and never found again.

LDS Church history is comprised of the accounts of multitudes of men and women who set the groundwork for the Church. And while there are plenty of ordinary individuals woven into that patchwork of history, there are also a handful of unique individuals who enliven the past and provide inspiration for the future. Known as the “swearing Apostle,” J. Golden Kimball is just such a character, one whose legacy of colorful language is surpassed only by his fierce loyalty to the gospel.

In J. Golden Kimball: The Remarkable Man Behind the Colorful Stories, readers are invited to come to better know this legendary man made famous by his unique humor and powerful testimony. From a chronicle of Kimball’s youthful adventures to the legacy he forged in his more than forty years as a General Authority, gear up for a rollicking ride through the life of one of the liveliest servants of the Lord. 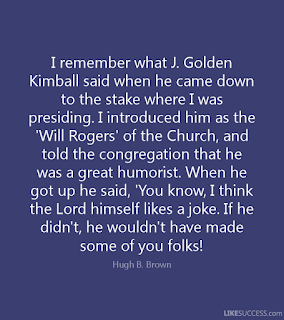 {My Review}
I was very excited to read and review J.Golden Kimball: The Remarkable Man Behind the Colorful Stories. You see, my father's two favorite apostles were J. Golden Kimball and LeGrand Richards. We spent many a Family Home Evening reading stories about J. Golden Kimball and many that I read in this new book were ones I had heard before in my youth. My dad always said he loved J. Golden because he was real and down to earth. The thing that people will learn most from this book is that J. Golden Kimball was more than the "swearing apostle". He did use colorful language at times in his life, but he also was very straight to the point when it came to talking to and teaching the people of the church. He didn't hold back most of the time.

I had not know of his hard life from growing up very poor after his father, Apostle Heber C. Kimball died, to him trying to start various businesses and losing money along the way. Author Kathryn Jenkins Gordon has such a wonderful way of telling Kimball's life story. She has a wonderful and fun voice as she teaches readers about the man and the many funny, sad and glorious things J. Golden did in his life. This book is not bogged down with just boring details of a man's life but is woven with much humor as Gordon shares about what truly made J. Golden Kimball remarkable. He had a powerful testimony of the gospel and could be very inspirational when needed.

"No man has any influence or power for good when angry."


I had to share a few of my favorite stories from the book about J. Golden Kimball that I remember first hearing when my dad shared them with our family.

This book was such a delightful read that I read it in one sitting. It's only 150 pages and is the perfect book for a lazy, Saturday afternoon. Readers will learn so much from J. Golden Kimball's life, especially how to find and use humor while going through the trials of life. I highly recommend this book to all ages of readers from teens to adults.

Here's a fun quote: “A sermon should be like a woman’s dress. Long enough to cover the essentials but short enough to keep your attention.”
― J. Golden Kimball


$25 Amazon Gift Card and a Free Copy of ’J. Golden Kimball’
a Rafflecopter giveaway
Posted by Why Not? Because I Said So! at 8:00 AM