Escape to Eden by Rachel McClellan-Blog Tour Review and Giveaway 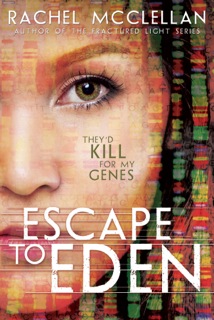 When seventeen-year-old Sage wakes up in a hospital with no memories, her only clue are the words written on her hand. With a deadly disease threatening to wipe out mankind, Sage must find out who she is and why most people would kill to get their hands on her--before it's too late. This fast-paced, futuristic thriller is a spine-tingling read! 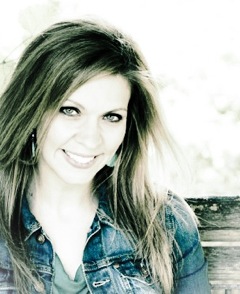 Rachel McClellan was born and raised in Idaho, a place secretly known for its supernatural creatures. When she's not in her writing lair, she's partying with her husband and four crazy, yet lovable, children. Rachel's love for storytelling began as a child when the moon first possessed the night. For when the lights went out, her imagination painted a whole new world. And what a scary world it was...

In the first chapter,this story starts by giving you a huge adrenaline rush and doesn't stop from there. I was only going to read a few chapters before I went to bed and two hours later I was still reading. Beware: this novel will suck you into this exciting story and doesn't let you go very easily until the very end.

Escape to Eden takes place in a world where "normal" humans or Originals are scarce because the rest of the population have become Mutants from excess use of DNA from many sources, human and animal. Main character, Sage, is an Original and wakes up in a hospital room with no memory of who she is. From that moment on she escapes and slowly her memory returns. This fast paced novel runs as fast and hard as Sage does in her search for her brother Max and her father.  The Primes want the Originals for their DNA to extend their lives. The world building is detailed and easily understood without dragging readers into boredom like some novels do. You learn enough about possible mutations, gene therapies, mutants and their powers which deeply involves you in this world. The bigger story is about what causes someone to lose the "human" side of them? Can a mutant still feel and show love? What happens when apathy takes over and humans lose the ability to feel and care? These are ideas and themes that run throughout the story and make you think, as well as be entertained by the kick-butt action.

This story is one of the best dystopian novels I've read in a long time. There is so much that is original and eye opening. I especially loved the characters of Colt a Noc, and Anthony and Tank. They all are Primes,humans that were given extra DNA to gain superior traits,with abilities that help Sage in her quest of getting to her father. Each character is so well developed that you can't help but care about each one and their well being.

Make sure to plan a time when you can sit down and read this all the way through. There are very few slow points in the book, because the action is always moving the story forward. The book ends in a way that leaves the door open to a sequel. I for one will be ready and excited to read the next book. I highly recommend Escape to Eden for adults and teens.

Excerpt:
"Stop!" a man shouts. He runs towards us. Two more appear behind him.
Jenna reaches a hand down. "Grab it!"
Colt takes hold and she easily lifts him out. They are all so strong.
"Go up, Sage,” Anthony says. “I've got these guys.”
He's holding the same dagger I'd had in my hand earlier.
"I'm not leaving you alone," I say.
"Three guys is nothing. I'll be fine. Go."
I look up toward where my brother sits waiting for me and then back at Anthony.
"Stop right there and we'll let you live," a guard says. He has a single spike sticking out of his otherwise bald head.
"Don't listen to him Sage," Anthony says. "You're too valuable. Just go before they capture Max again."
This makes me move. I scramble up the ladder. When I'm at the top, I shout down, "Come on! You can make it."
He stares up at me through the narrow opening and smiles. "Change the world," he says just as an invisible blast knocks him to the ground.