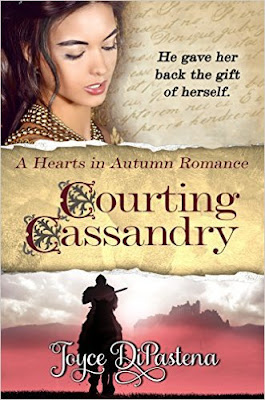 Is it too late for second chances when the girl you loved in your youth comes back into your life?

Gerolt de Warenne became guardian to a child-heiress named Cassandry when he was only nineteen-years old. As he watched her grow into a lovely young woman, he found himself falling in love with her, but Cassandry viewed him as an older brother. So, burying his feelings, he gave permission for her to marry another.

Twenty-four years later Gerolt and Cassandry meet again. With the loss of their respective spouses, Gerolt hopes to finally court Cassandry, but she desires to remain a widow. Instead, they agree to a betrothal of their children.
Matters become complicated as their friendship begins to evolve into the romance Gerolt has always wanted. But by the law of the medieval Church, Cassandry and Gerolt can’t marry if their children do. Can they find a way to be together? Or must they sacrifice their future for the love of their children?

“Courting Cassandry” is a “Hearts in Autumn” romance, medieval romances revolving around heroes and heroines “in the autumn of their years.” Because love isn’t only for the young!


“You wish me to marry one of your knights?” She rose so swiftly she knocked over the embroidery basket next to her chair. Her laced hands began to wring one another. “My lord, I beg you, I am quite content as a widow. Do not—Of course, if you command me I must obey . . . but I pray you will not—”

“Command you? When did I ever command you to do anything, Cassandry? And when did you cease to call me Gerolt?”

She bit her lower lip before she replied. “When I became wife to your vassal, Sir Antony. Things are not what they were between us, my lord. They can never be so again. Too much time has passed. We both know that. I am your devoted servant.” She curtsied, her hands still moving with distress against her tawny gown. “And I must do as you . . . request. But I have no desire to marry again.”

Disappointment pierced his chest. He stepped forward, ignoring the sudden urge to move within arm’s reach of her. Even as she stood rejecting him, he still felt the charge of desire for her.

She did not look away this time but gazed with so much earnestness into his eyes that the hopeful fluttering in his stomach turned to a leaden ball.

“I should not change my mind if you asked me to wed yourself. I am too old to be a wife again, my lord. This knight of whom you speak—no, please do not tell me his name—I wish to remember all of them fondly, without awkwardness should we meet. Whomever he is, he deserves a younger, merrier woman than I.”

’Twas the first time he observed it, the loss of merriment in her eyes. She had been so bright and cheerful at Lyonstoke, her spirit so warm, her nature so sweet and trusting. But she’d had a joyful future waiting to embrace her then. He supposed a woman who had loved as fervently as she had would be a woman who would mourn the loss of that love to her final days.

He resolutely clamped down his hurt, as he had the day he had given her hand to Antony.

I have truly loved reading a romance where the main characters are between the ages of 40-50+! There is something about more mature characters that bring their life stories into play as they contemplate a new romance in their life. Cassandry and Gerolt's story is one of true heartache. It is one of lost-love, unhappy marriages, longing for the love that wasn't within in their reach twenty years before, but it is now that they are given a second chance if only...

Yes, it's that, "If only..." that is the main plot in the story. Neither one of the main characters comes right out and say how they feel at first so there is a lot of beating around the bush about how they're feeling and expressing themselves to each other. Cassandry and Gerolt decide to have their teens become betrothed to one another, but both Egelina, Cassandry's daughter and Rauffe, Gerolt's son, aren't liking their parents plans. Then you throw in old grudges with other characters, jealousies, blackmail and other nefarious things and you have more than a romance here. There is enough mystery, suspense and other dark things going on that you are not sure who will make it out alive, happy and/or sane.

The dialogue is so beautiful with the language from this time period. Joyce's writing brings the beauty and mystic of medieval England alive in her books. You are always assured of a clean read and know that you will have a good story with an intriguing plot line when you read a book by Joyce DiPastena. If you are looking for something unique and different from the "normal" romance out there, you need to pick up Courting Cassandry or any of Joyce's books. She knows this time period so well and she knows how to write a satisfying book for romance readers.

***This book is for teens and adults. There is some kissing, no sex, and little violence, except for a mild knife attack.***

Purchase at these Locations:


Meet Author: Joyce DiPastena
Joyce DiPastena dreamed of green medieval forests while growing up in the
dusty copper mining town of Kearny, Arizona. She filled her medieval hunger by
reading the books of Thomas B. Costain (where she fell in love with King Henry II
of England), and later by attending the University of Arizona where she
graduated with a degree in history, specializing in the Middle Ages. The
university was also where she completed her first full-length novel…set, of
course, in medieval England. Later, her fascination with Henry II led her to
expand her research horizons to the far reaches of his “Angevin Empire” in
France, which became the setting of her first published novel, Loyalty’s Web (a
2007 Whitney Award Finalist).
When she’s not writing, Joyce loves to read, play the piano, and spend time
with her sister and friends. A highlight of her year is attending the annual
Arizona Renaissance Festival. She lives with her two cats, Clio and Glinka
Rimsky-Korsokov, in Mesa, Arizona.