Review of, Defenders of the Covenant, by Angie Lofthouse 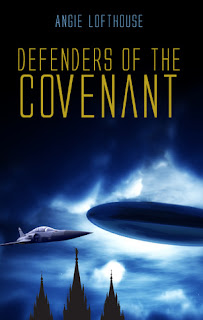 Can earth be saved?

Hannah and her friends have been warned about the danger lurking outside of their secret refuge from the alien invaders who devastated Earth years before. The teenagers leaders have raised them in the Latter-day Saint faith, teaching them to trust God, but when McKenzie and her rebellious boyfriend Jeremy decide to run away, Hannah and Derek follow, determined to bring their friends home.

Once outside, the four teens soon realize they cannot return to the refuge without endangering everyone there. Captured, enslaved, and separated, Hannah, Derek, and McKenzie each learn the unique role they must play in liberating the earth. The friends must battle with android soldiers and attack vessels, and face their own inner struggles to overcome the invaders. After all, not even an alien invasion can stop the work of God.

My Review:
Defenders of the Covenant is a truly unique book. It is the first book that I have read that could be labeled as, LDS Science Fiction. The main characters are members of the Church of Jesus Christ of Latterday-Day Saints(LDS) who are trying to survive in a world that has been taken over by aliens. So that is where you get the genre label of, LDS Science Fiction. There are some very cool and unique ideas found in this story. The action is fast paced. You are seeing action from all parts of the country, from many different characters. I enjoyed Angie's writing style and liked following each of their stories. She wrote characters that were easy to cheer for, such as Hannah, Derek and McKenzie. As they each struggled in the fight for freedom, with God on their  side, I felt like I could cheer for them.

The only down side in the whole story for me were the aliens. I'm not going to spoil things and tell you what they look like, but the bad guys didn't feel fully realized. They felt more like caricatures of bad guys than actual aliens capable of true evil.I guess I am used to the fierce, tall, mean-looking bad guys of the sci-fi books/movies I have seen and read all of my life. My expectations were not met, considering the truly awful things they had been doing to the people on Earth, and how far advanced their technology was. Other than this, you will find a well written story, with courageous young people that work together to save Earth.

You can purchase Defenders of the Covenant HERE.

Angie Lofthouse is a stay-home mom of six children. Her fiction has appeared in a variety of print and online magazines. She is also an editor for Mindflights Magazine. Her first novel came out this year. She lives in a little canyon in the foothills of the Wasatch Mountains with her family of writers, artists, singers, composers, illustrators and musicians.
Posted by Why Not? Because I Said So! at 4:04 PM