My Review of "Seers" by Heather Frost 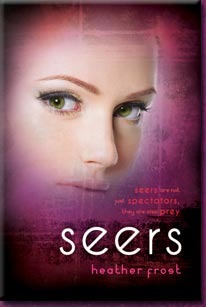 When Kate Bennett survived the car accident that claimed her parents' lives, she knew her world would be forever changed. But her life is more dramatically altered than she first realized. Not only is she able to see “mood auras” on the people around her, she's even started seeing invisible people with no colors at all. And no matter how attractive the new addition to her American Lit class is, Kate sees what no one else can—the dangerous truths this mysterious man threatens to pour into her life.

Patrick O'Donnell was killed in the Irish Revolution in 1798. He's here now to try and keep Kate alive, and stop her life from spinning out of control. The one thing he's not going to do is fall in love with her. But plans change, especially when Demons are involved . . .

Kate is about to enter the world of Seers; where immortals are at war with each other, and unfortunate mortals like Kate are in over their heads.

I really enjoyed reading Seers. I have not read many paranormal books with angels and demons. In this book there are demons, but the "good" guys are called Guardians.  The main character, Kate, is what is known as a Seer. A Seer can see the auras of all people, including the demons and guardians. This is why both groups of immortals are seeking her out.

Kate and her friends are still in high school. Even though the background is set in a high school, there are many strange things happening that change Kate's world quickly.There is a typical love triangle found in most YA books, but this one I liked better than most. The main focus in the story in not the love triangle, but is on Kate learning about how and why she is special. The beginning starts slowly, but once it picks up and Kate learns all about Guardians and Demons, there is a lot of action.

I like Kate's Guardian Patrick. Though he is very handsome and strong, he is a really nice guy.You can't help but really like him. Kate's boyfriend is also a nice guy, so I didn't favor one over the other until about the middle of the story.In fact, you feel very sad for Aaron by the end. Patrick is well written along with all of the other characters. One of my absolutely favorite characters would have to be Kate's Grandfather, Henry. He has wit, charm, love and a lot of understanding for his oldest granddaughter. There is a super secret about him that we discover later on in the story. I really like this twist and I hope that we see more of Grandfather Henry in the next book.Kate's best friend, Lee, is also a fun addition to the story. She and Kate are polar opposites, but the friendship works very well.

One thing that I should warn some readers about, most of the book is told in Kate's POV(point of view).  In the middle we suddenly have a chapter or two that switches to Patrick's POV. I had to stop and think for a minute about what was happening. I think the book would have been fine without the switch. I just know that many readers out there don't like sudden POV shifts and I wanted to prepare you. This did not ruin the story, but it just threw me for a loop.

Seers is a well written first book. Heather has a great way of writing interesting characters and has a fresh new take on Demons and Angels/Guardians. Teens will love this book and any fan of the YA Paranormal genre. Seers leaves things open for a sequel which I will happily read.


FTC: FYI The free e-book copy of Seers was given to me by Cedar Fort and Netgalley. In no way did this influence the review that was given.

For a sneak peak at "Seers" please go to Heather's website where you can read the first eight pages. Seers will be released on October 8, 2011. You can pre-order Seers at Amazon.com 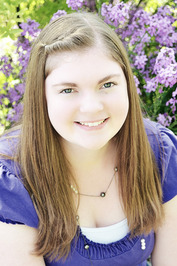 About the author
I was born in Sandy, Utah, a few days before Halloween in 1989. I lived in Salt Lake City until I was about six, and then I moved North and settled into the place I still call home. I'm the second child of ten, and I absolutely love being the big sister.
I can't remember a time when I didn't enjoy reading, and I did a lot of it. I also dabbled in writing when I was young, though nothing serious until I entered the teenage years. Becoming an author is a dream come true!
I attended Snow College, and there got the best job ever as a writing tutor. I graduated in May 2011 with my Associate of Science, and am currently pursuing a Bachelor of Science as an English Major.
I love movies, music, and books—although I do think that the dumbest question on the planet is the whole “What's your favorite book/music/movie?” The best answer I've come up with is, “Whatever I'm reading, listening to, or watching at the time.” Generally, it's an accurate answer.
I love the smell of lilacs, wet cement, and freshly cut grass. I love brownies, rain, and curling up with a good book.
You can learn more about Heather and her book by going to her site http://www.heatherfrost.com/index.html.
Posted by Why Not? Because I Said So! at 5:23 PM