"What Do You Think About...Wednesday" With Aprilynne Pike 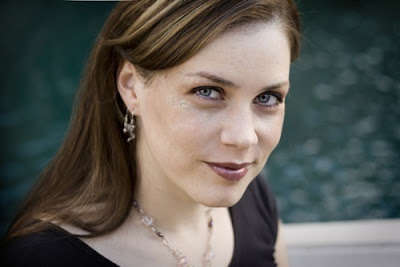 I am starting a new feature on my blog called, "What Do You Think About...Wednesday". I will be asking people, readers, writers, etc. , what they think about certain topics. I wanted to start off with a bang, so I directed my first question to Aprilynne Pike, an American author best known for her debut novel "Wings", which was released in English on May 5, 2009. Her first novel debuted as a New York Times best-seller, and reached the #1 spot on the Children's Best Seller list, making Pike the best-selling non-celebrity children's author to debut in 2009. Her second novel, "Spells" likewise debuted on the New York Times Best Seller list.
-What do you think about the direction that Young Adult Fantasy Writing is heading?
Well, certainly it is a great time to be writing for young adults in any genre--which is probably why so many traditionally "adult" authors have released YA books lately. In terms of genre, I think the greatest thing about writing YA is that rarely "heads" anywhere at all. Book bloggers and publishing news outlets often fill slow news days with speculation on the trends; headlines like "Faeries: The New Vampires?" or "The Year of Dieselpunk (No Really, This Time It Is)" generate lots of interesting discussion. But the truth is, there's always room for an entertaining story. I once asked a bookstore manager how he felt about people buying books at discount club stores across the street and bringing them in to the bookstore for me to sign. His response was, "Reading benefits everyone. In the long run, the more books Sam's Club sells, the more books I sell, because they're making readers. And eventually, those readers come here."
And that's what we do: we make readers. Young adult fantasy is a place a lot of teens turn for a break from the required reading they get in school. It's somewhere they can develop the habit of reading for pleasure instead of because they're "supposed to." The problem with heading a particular "direction" is that if we focus too narrowly on trends and the "Next Big Thing," we end up serving a much smaller range of interests. This is why some folks are worried about signs that the YA market may be shifting toward the "adult publishing" model, with more "lead titles" and a smaller midlist. Adult interest in YA books (and YA fantasy in particular) may be at an all-time high (and heaven knows I cherish my adult readers!), but the need for a broad range of YA titles, to appeal to as broad a range of young adults as possible, is as high as ever.
Fortunately, I think overall the direction YA fantasy is heading is "into the future." For every teen who gets too old for faeries and trolls and innocent romance, another tween gets old enough to want her adventure stories to end with a little kissing. And every new generation deserves a chance not only to appreciate the classics, but also to discover contemporary favorites written especially for them.
Thanks so much for your answer Aprilynne. You can learn more about Aprilynne and her books here.
Posted by Why Not? Because I Said So! at 6:49 AM