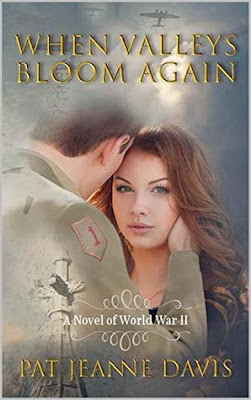 As war approaches in 1939, Abby Stapleton’s safety is under threat. Her father, a British diplomat, insists she go back to America until the danger passes. Abby vows to return to her home in London—but where is home? With her family facing mortal danger so far away and feeling herself isolated, she finds it hard to pray or read the Bible. Did she leave God behind in war-torn London too? Abby becomes friendly with Jim, a gardener on her uncle’s estate.

Jim can’t get Abby out of his mind. Did she have a sweetheart in England? Was it foolish to think she’d consider him? He curses his poverty and the disgrace of his father’s desertion and drunkenness haunts him. Can he learn to believe in love for a lifetime and to hope for a happy marriage?

Abby couldn’t know the war would last a long time, nor that she would fall in love with Jim—soon to be drafted by the US Army—or that she’d have to confront Henri, a rejected suitor, determined by his lies to ruin her reputation and destroy her faith in God’s providence. Will she discover the true meaning of home and find happiness with Jim?

PAT JEANNE DAVIS has a keen interest in the 20th Century United States and British history, particularly the period of World War II. Her longtime interest in that era goes back to the real-life stories she heard about family members who served during the war. When Valleys Bloom Again is a debut inspirational romance set in WWII. She enjoys flower gardening, genealogy research, and traveling with her British-born husband. She writes from her home n Philadelphia, Pa. Pat has published essays, short stories, and articles online and in print. She is a member of American Christian Fiction Writers.

Writing a historical novel requires extensive research. At times I went to distant and unfamiliar places in order to immerse myself in the era and the setting of my story’s world. On repeated trips to England with my British born husband, I combined visiting family there with more research for my novel in progress. I visited living museums throughout England where people went about their tasks in clothing that would’ve been worn during the 1940s. The guides were always helpful and eager to share what they’d learned. I entered an actual air-raid shelter, spent hours in a war museum, toured an aerodrome, and the Churchill War Rooms in London. I also interviewed veterans of WWII in both the UK and US.

The opening for my WWII inspirational romance, When Valleys Bloom Again, was conceived after reading a biography on the life of Kathleen Kennedy, daughter of Joseph P. Kennedy, the United States Ambassador to the United Kingdom. He and his family were living in London when Britain declared war. Kathleen Kennedy’s story intrigued me. She was forced by her father to return to the US for her safety. Kathleen had made many friends while living in London and was determined to return someday. She eventually did go back, served in the British Red Cross, and married William Cavendish who was in line to become the next Duke of Devonshire. Sadly, he died in battle a few months after their marriage.

I based my protagonist, Abby Stapleton, loosely on Kathleen Kennedy’s situation at the outbreak of war in 1939. Abby is the American-born daughter of a British diplomat. Her father sends her back to the US to escape the impending war. She too vows to return to London.


Fortunately for me I enjoyed doing the research for When Valleys Bloom Again and became especially excited whenever I uncover an extra special tidbit of information.


On one of my return trips to Chatsworth House, the home of the present Duke and Duchess of Devonshire, I learned from a tour guide there that in 1963 President John Kennedy had visited his sister Kathleen’s grave while on his way home from a trip to Ireland, only six months before his assassination. He and his sister had been very close throughout her life. I found the grave of Kathleen Kennedy in St. Peter’s Churchyard, not far from Chatsworth House. She too had died tragically shortly after peace was declared. Standing before Kathleen’s grave, I could only imagine the sorrow President Kennedy felt.


On another research trip in the north of England, I went into the largest purpose-built civilian air raid shelter in England extended to accommodate 6,500 people during the Second World War. The Stockport Air Raid Shelter is a network of underground tunnels, a mile long, carved out of the sandstone hills on which the city stands that provided not only protection but a way of life for families. This underground world still intact today as it was during the war years gave me an opportunity to learn about the raw realities of life during the Blitz. I came away with a deep appreciation for those who struggled to survive with only the basic amenities in such depressing and stressful surroundings and admiration for my husband’s family who lived through those long years of war. 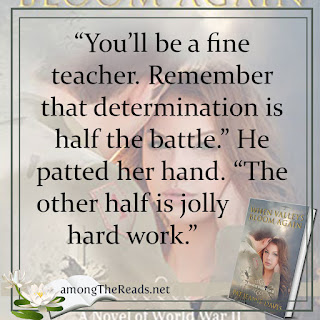 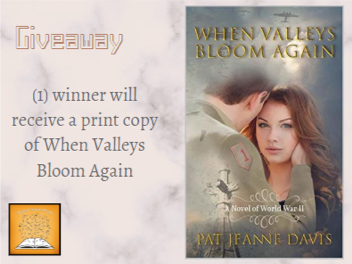 One winner will receive a print copy of When Valleys Bloom Again.

Welcome to the Blog Tour  for Beauty from Ashes   by Pamela Hart,  hosted by JustRead Publicity Tours ! About the Book Title : B...