The NeverLand Inn (A Culinary Romance With Recipes) By K.C. Grant: Blog Tour Review & $25 Giveaway and copy of the book 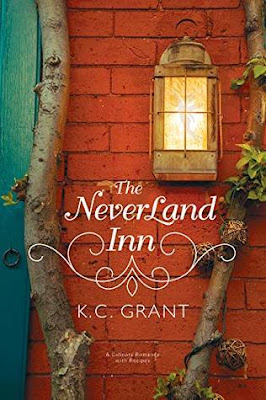 Book Summary
Daniel Cavanaugh has it all—a lucrative career as a lawyer, a gorgeous fiancée, and his future mapped out for him. So why is he feeling increasingly dissatisfied with his life? When the assignment to handle his late grandmother’s estate takes him to the California coast, Daniel welcomes the escape. Staying at the nearby bed-and-breakfast isn’t really his style, but he soon realizes the inn may hold the key to the answers he’s been seeking. Spindrift Cove has few opportunities for a young unmarried woman like Sarah Michaels. Even so, she enjoys her solitude as owner and chef at the Neverland Inn. She thrives on catering to the needs of her guests and treating them to her fantastic cooking. But when Daniel walks through her door, he immediately tests her patience. Though he is handsome and well-bred, she finds him insufferable. Soon, however, the tranquility of the inn works its magic, and Daniel and Sarah forge a sweet and unexpected connection—until the life he left behind in the city demands his return and it seems that a happily ever after may not be on the menu after all.

My Review
The Neverland Inn is such a cute story. I love main character Sarah Michaels, the owner of the Neverland Inn. She is kind, caring, talented, and so very charming and normal. Her personality shines in this novel and jumps out of the pages, even though she at times shows some self-doubt. It differs greatly with her current guest, the staunch and uptight lawyer, Daniel Cavanaugh. Poor Daniel's life is being governed by his pompous father and his stuck-up, and gorgeous Fiance'. The only person sho had ever made him feel truly loved was his Grandmother who has just passed away in the story. That's how he finds Sarah's Inn when Daniel has been to his Grandmother's home to get ready for an estate sale.

Sarah's Inn is small, but she treats all of her guests so well, especially with her amazing cooking. One of my favorite things about this book are the recipes found at the end of each chapter. Here are some of the recipes you'll find in the book:


I also enjoyed Sarah's dog Muttley, whose personality was darling. Sarah brings life to a room and she brings life and love into other's lives. It's Daniel that has the life changing experience in the book. By the end I really liked him and how he realized what was most important in his life. This book is under 200 pages so it's a fast read and I did read it all in almost one sitting. This novel is not only a romance, but also there's a situation at the end with several angsty moments. The Neverland Inn ends up being a feel good story, with a cute romance, and yummy recipes. Check this one out!
Meet Author K.C. Grant 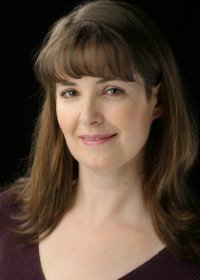 Kim was born in rural Idaho, but has made Utah her home for most of her life.
After serving an LDS Spanish-speaking mission to Anaheim, California, USA,
she returned and continued her studies at Weber State University, participating
in a study abroad program that allowed her to study at the Centro
Mexicano Internacional in Michoacan, Mexico. She has been a freelance
writer for twelve years. Much of her work appears in family-oriented magazines
such as LDSLiving, the Washington Family, Back Home, Parents & Kids, and
Natural Life. She's also a member of DeseretConnect, writing for KSL and The
Deseret News. She was the president of the Bountiful chapter of the League of
Utah Writers for three years and is a member of the Association for Mormon
Letters and LDStorymakers. Though raising her children is still her most
important task, she combines it with the demanding job of
working out the numerous plots she has for future novels. She and her husband of
twenty-four years love to travel and scout out new settings for books. While ancient
Mexico was the setting for her first published novel, Abish: Daughter of God and its
sequel, Abish: Mother of Faith. --modern Mexico was perfect for her suspense novel
titled Venom, which was released January 2012. Other publications include two short
stories published in Covenant's seasonal compilations. The Neverland Inn , published
in 2018, is her second romance, her first titled Three Little Words was released in 2016.
Learn more about K.C. Grant HERE!
Blog Tour Schedule
*Sept. 10th: http://mybookaday.com/, https://www.rockinbookreviews.com/,
https://brightlystreet.com/
*Sept. 11th:  http://lisaisabookworm.blogspot.com/,
http://empowermoms.net/, http://bonnieharris.blogspot.com/
*Sept. 12th: http://ldswritermom.blogspot.com/, http://fireandicereads.com/,
https://www.lovebugsandpostcards.com/, http://www.kindleandme.com/
*Sept. 13th: http://katiescleanbookcollection.blogspot.com/, http://thoroughlyhere.blogspot.com/,
http://heidi-reads.blogspot.com/,https://ldsandlovinit.blogspot.com/
*Sept. 14th: http://literarytimeout.blogspot.com/, http://minreadsandreviews.blogspot.com/,
https://www.wishfulendings.com/, http://booksaresanity.blogspot.com/,
https://whynotbecauseisaidso.blogspot.com/

Email ThisBlogThis!Share to TwitterShare to FacebookShare to Pinterest
Labels: $25 Giveaway and Copy of the book, The NeverLand Inn (A Culinary Romance With Recipes) K.C. Grant: Blog Tour Review