Review of "All the Stars in Heaven" by Michele Paige Holmes 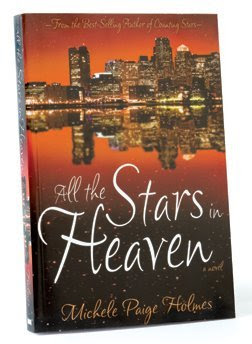 "All the Stars in Heaven" is Michele Paige Holmes second published book. Her first book, "Counting Stars" won the first Whitney Award, ever, in the category of Romance. There are many of us that fell in love with "Counting Stars" and Michele's writing. I could see her amazing talent she possessed because she wrote such a captivating story. You often wonder how something as good as an "award winning" first book could ever be topped? Well, I am here to tell you, that this is exactly what Michele has done. She went above and beyond with her writing of "All the Stars in Heaven". It was very evident to see the fabulous growth that Michele has made as a writer.

This story was much more than a romance, but was also a murder mystery/suspense novel. The storyline is very deep and involved with happenings of current times and what happened to main character Sarah Morgan's mother many years ago. The other main character, Jay Kendrich, was first introduced in a smaller role in "Counting Stars". I have to admit, I did not really like Jay that much in the first book. Jay has grown up a lot since the first book and he is more appealing this time around. In fact, I found myself hoping that everything would turn out for him in this book. He also finally finds love in this novel. It is hard to obtain that love, granted, but eventually it comes along.

I really did not expect such a deep storyline when I first picked up this novel, so I was happily surprised when the mystery continued to grow and things became more and more complicated for our main couple. I ended up loving this book. There is a very high angst level, but this fact keeps you glued to the pages. 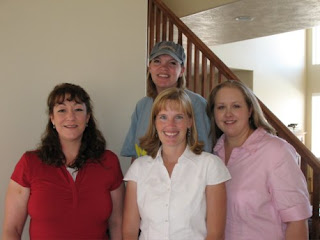 Here is a picture of Michele,(in the middle) with the women of LDS Womens Book review (Shanda, Hillary and of course me!). Michele joined us to record a podcast right after "Counting Stars" first came out. She will be joining us soon again for another podcast.

I wanted to ask Michele many questions about her new novel as I posted this review. So, here are a few questions and answers for you about, "All the Stars in Heaven."

1. Great job on your new novel Michele! I was very impressed with "All the Stars in Heaven". Did you set out from the beginning to write a mystery/romance?


For whatever reason, Jay and Sarah's story came to me as a suspenseful romance (not to be confused with romantic suspense, where the suspense is the focus of the story). I still wanted the romance to be first and foremost. That said, the storylines were tightly intwined, and it became very apparent, very quickly that I'm not a suspense writer. That element of the plot was more than a little challenging.

2. I could tell as I read your book that your writing has continued to grow and develop by leaps and bounds. Mind you, I loved your writing before, and this story seem so perfectly formed. How do you feel about your own writing progress?
I feel as if the manuscript I completed earlier this year---a YA fairytale written in first person---is probably the best thing I've ever written. I sincerely hope I get better with each book. Making the leap to being able to write in first person was huge for me, as I've tended to be a bit of a "head hopper" :) in the past.

3. Did you outline the story first? There were so many characters and plot lines weaving together throughout the book. I would be surprised if you hadn't done an outline.
I didn't do an outline for All the Stars in Heaven, Counting Stars, or any of my other novels. I do like to print out a calendar of the time I'm writing about and make notes of what events in the story happen on which days.

4.Why did you decide to write your second novel about Jay Kendrich? I thought for sure that you would write the second novel about one of Jane's sisters.
I do have a novel planned for Jane's sister, Caroline, and I am currently writing Tara's (Jane's crazy friend) story. But Jay was a great character who didn't get a happy ending. I wanted readers to see him get his turn at love.

5.I think I recall you saying that there will be one more "stars" book that you will write in this series? If this is so, have you already started writing it or are you currently working on it ?
Caroline's story was supposed to be next, but the editors at Covenant felt Tara's story should come first, so a few months ago I switched gears, set Caroline's manuscript aside, and dove into Tara's world. Tara is a really great character, and I'm having a lot of fun with her story.

During the few years since we've last seen her (wearing a bright orange pant suit and sobbing at Jane's wedding), she's moved to LA and become a big time realtor. But life is lonely, and she hops a plane in late December, hoping to meet up with some girlfriends at a spa in Boulder, Colorado for the holidays. Through a series of misfortunes, she finds her plane rerouted to Salt Lake City, her wallet stolen, her luggage lost. The one man brave enough to come to her rescue is Benjamin Whitmore, a pig farmer from Ohio, and Tara's polar opposite. It isn't long before sparks fly between the two of them as tempers clash. But opposites do attract, and by the end of the story Tara finds out that Ben's ways do have some appeal and her heart might not be in such a different place after all.

6. What other books do you have in the works to write?

I would like to finish Caroline's story and publish that through Covenant. I also have a second (one is completed and unpublished) Scottish historical started. What I'm itching to start on this fall is the sequel to the fairytale I wrote this past year.

7.When is the most perfect time for you to write?

The time I find most productive is when I have no interruptions from my offspring :) My husband is kind enough to take over a couple of Saturdays a month, so I can take my lap top and head to the library for 4-5 hours.

8.What are your favorite books to read? Are there any authors that have inspired you in your own writing?

Favorite books to read is a difficult question. I love reading and am always finding new authors I enjoy. A few of my favorites are Lisa Wingate, Lolly Winston, and Judith McNaught.

9. Who is your greatest supporter/s in your writing? Your husband, your kids or your writing group?


My husband is my greatest supporter. Without him, the books wouldn't happen. My children . . . not so much. Our teenagers want to know why I have to hog the computer so much. My younger children always want me to get off the computer and play with them, feed them, change them etc. My writing group, on the other hand, is awesome. They're amazingly talented and generous. I rely on them to help me get the plots in my head to make sense on paper.


10. Could you give some words of advice to beginning writers?

Join The League of Utah Writers, Romance Writers of America, or any other applicable writing organization you can. Meet other authors. Find a critique group. Attend faithfully. Write often (even if it's just a few sentences a day). Realize rejection is part of the program. Keep at it. Don't give up!

Thanks so much Michele! I look forward to podcasting with you again very soon!

Thanks, Sheila. Hope this is what you had in mind.

You can purchase "All the Stars in Heaven" here: